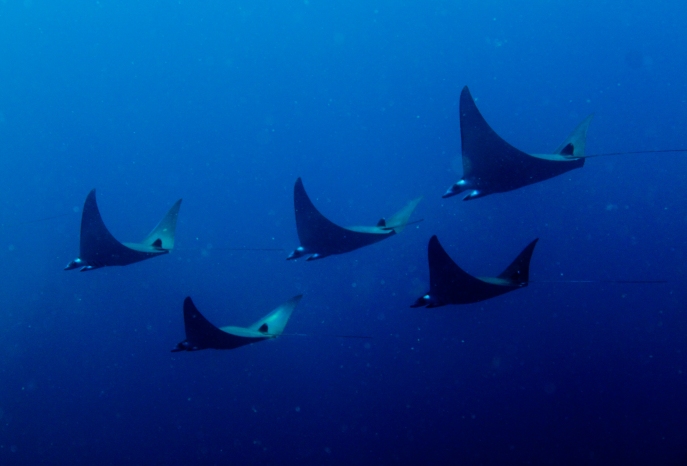 This time round we have a lot to catch up on! Guest blogger, and founder of The Fins United Initiative, Melissa Márquez (@mcmsharksxx) drops in, Evie hands in her thesis, we hear about whales bigger than blue whales! *, fish gorging on mice, and the shark attack ‘problem’.

Analysis of animal accelerometer data using hidden Markov models. Accelerometer data is my jam, so I’m always intrigued to learn more about the technology. I first heard about accelerometers from Dr. Nick Whitney from MOTE while I was in undergrad, and have been fascinated ever since. Accelerometer data allows scientists to identify correlates and drivers of activity and, in turn, behaviour. Get excited people: this is a new way to quantify animal behaviour!

How Many Fish Are in the Sea? Scientists, fishermen, policy makers- they all want to know how many fish are left in the oceans, and what the safe number to take out and consume is. Most methods have a simple proposed “fix” counting. Yet, if you’ve ever worked with counting fish, one knows it can be hectic and masses of fish can blur into one big silver blob. The audio-visual techniques delved into in this article may assess populations more accurately without taking more fish out of the sea. A great read on a question that has no easy answer.

WHAT IS THE SHARK-STEPS-ON-LEGO SHARK ACTUALLY DOING? First is a shark photo that was just too perfect not to make into a meme. In fact, it’s been the subject of multiple memes, my favourite being “Rare image of a shark stepping on a Lego.” We’ve all been there. So what exactly is the great white shark doing in the picture? Author Sarah Keartes (find her on Twitter @sarahkeartes) did some sleuthing and found out that this picture captures a great white shark investigating its surroundings with its mouth by opening it. This behaviour is known as “spy-hopping,” and Keartes goes more in depth about it. A great read!

Rare image of a shark stepping on a Lego. pic.twitter.com/xkadJmPkRg

The next interesting shark news is the idea that megalodon has resurfaced in the deep thanks to a video The Buzz Channel recently released. Let me just reiterate something: MEGALODON HAS BEEN EXTINCT FOR A VERY LONG TIME. MEGALODON WAS NOT JUST FOUND. Chances are you’ve seen this video, seeing as how it has 2,057, 568 views at the time this article was written. And while it isn’t megalodon that you are seeing, it is a pretty cool deep-sea shark: the Pacific sleeper shark (Somniosus pacificus). These sharks are a close relative of the Greenland shark (Somniosus microcephalous), who became famous earlier this year when researchers were able to pinpoint the animal’s age at 392 via eye lens radiocarbon (published findings can be found here).

HASHTAGS WORTH A LOOKIE:

Have you been checking out the #scanAllFish hashtag? No spoilers, but it’s worth taking a gander at while you binge watch Netflix David Attenborough documentaries (or is that just me…?).

A WIN FOR FINS! Did you hear the fintastic news? The Convention in the Trade in Endangered Species (CITES; you can learn about what went on following #CoP17 on Twitter) met in Johannesburg, South Africa recently. The 182 nations of CITES listed the following sharks and rays on the CITES Appendix II: all three thresher shark species, silky shark, nine species of devil (mobula spp.) rays. With the recent listings, there are now more rays on CITES Appendices than sharks. What a big win! A re-hash of what went down can be found here .

On a final note, although the summer season is being welcomed with open arms by the Southern Hemisphere (though it certainly still feels like winter this past week in parts of New Zealand), remember a few water safety tips: Practice the buddy system (or swim in a group) when swimming in the ocean. Be vigilant when water visibility is low (try the stingray shuffle method to avoid a painful jab from a startled ray); and stay away from areas where fishers are using chum, baitfish, etc. Be aware of rip currents and know what to do if ever caught in one. And last but not least, wear protection from those harmful UV rays while you’re enjoying a lie on the beach or while you’re snorkelling/diving. I try my hardest to look for reef safe sunscreens, and there are a few good ones in Australia that provide international shipping to New Zealand for those interested!

I always thought that the blue whale was the largest animal ever to live on Earth but it turns out that isn’t quite correct! Blue whales are huge, growing up to 30 metres in length and 180 tonnes in weight. Apparently hybrid blue and fin whales (which were relatively common historically and still present in reasonable numbers now) are bigger again! I am guessing it is due to hybrid vigour but I am not certain. You can read more about various types of hybrid whale over at macroevolution.

*Edit: The plot thickens…damm I knew I wanted this to be true too much. Ill look into it more when I get a chance.

Why are we scared to go in the water? Understanding our relationship with #sharks https://t.co/JF96x5DP3W pic.twitter.com/VzZejwoKC0

A side project that Matt and I are working on got a bit of a write up on the Stand.

All of us here at Fish Thinkers went to the joint Australian Society for Fish Biology + Oceania Condrichthyan Society conference in Tasmania early in September.

The opening day of the conference included a ‘Women in Ichthyology’ session, with talks by six keynote speakers, as well as a discussion forum and poster exhibition which was a big highlight. If you didn’t make the conference but would like to take a look a little bit of what went on then you can take a look at talk titles and abstracts online  and if you aren’t a member…get involved! It’s a great society of fish lovers.

More from the lab at UoW: “Burrowed into the icy creek beds of the Southern Highlands lives a tiny population of critically endangered native crayfish. The rarest crayfish in NSW, in fact” and it doesn’t seem like anyone knows they are there!

This arrived today–A photo commentary on the state of both Matts and my PhD…Perhaps? Dr Nathan Knott @400knots (co-supervisor for both our PhD work) has been presenting over at the Uni of Pisa @unipisa; hosted by Prof. Lisandro Benedetti Cecchi and A/Prof Fabio Bulleri. His seminar included some of the extensive fish tracking being undertaken in Jervis Bay (South Coast of NSW, Australia). Pisa is a University with a long history (starting in 1343), has hosted many famous students and famous professors (including none other than Galileo) and is well known for its marine research. Sounds like a pretty good gig! 🇮🇹 Photo: Joaquin Knott #UniPi #UniPisa #UniversitàdiPisa #uow #thisisuow #nswdpi #marineresearch #sealife #Galileo #pescare

Finally from me: Evie handed in her Honours thesis a couple of weeks back- yeeew!  Congrats! Ill chase her up for a blog run down on it in the near future.

As Lac mentioned above we went travelling down to Hobart for #ASFBOC2016 and we even managed to sneak in some fishing. You can see a photo recap of our session here on our fishing journal.

Also, a paper my colleagues and I published last year on attracting pelagic fish to underwater cameras is now open access!! You can read the full article here via University of Wollongong’s Research Online.

Interesting news from the past couple of months has been the discovery of a population of catfish with an appetite for native mice! Catfish from this remote West Australian river were found to be much larger than individuals from other areas, probably due to their more carnivorous diet. This reminds me of what happens over the ditch in New Zealand when exotic trout gorge themselves during mice plagues.

Shark-human encounters are topical at the moment, and I’ve just finished writing my thesis about whether new shark attack mitigation technologies will work and be accepted as solutions, so I’m pretty immersed in the debate. Jane Williamson has written an interesting article about why extending QLD’s culling program to NSW is not a good option. Research on the complex behaviours of sharks and differences between species is also indicating that shark attack solutions might have to be species specific.

On the blog this month:

Tagging along with the Coastal Carolina University Shark team

The Stand: Why are we scared to go in the water?

See you next month!